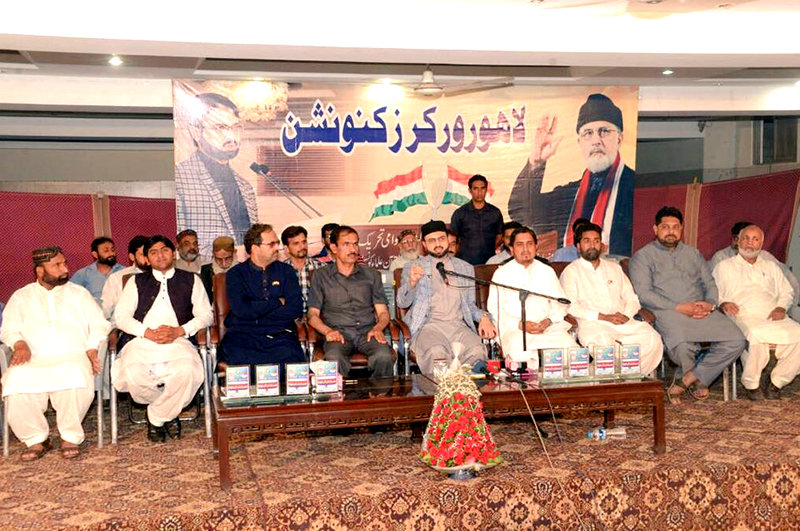 Chairman of MQI Supreme Council Dr. Hassan Mohi-ud-Din has said that we have demanded of the government several times to make the Justice Njafi’s report public. He warned that the PAT workers were losing the temper and if they chose the streets as the means of seeking justice, the corrupt and murderous rulers would find no place to hide. He lamented that even the judge who heard the hearing of the Model Town incident had been transferred. He said that the rulers would face their humiliating end even in this world due to massacre of 14 innocent people. He vowed that we would not abandon our struggle until those who ordered the massacre of people and those who executed the orders were not convicted and punished, while noting that the current rulers were the masterminds of the Model Town brutality. Very soon the public would hold them accountable for their oppression and barbarism.

Chairman Supreme Council was warmly welcomed and given a standing ovation upon his arrival in the Worker Convention. The rose petals were showered on him and the audience welcomed him by raising slogans.

Dr. Hassan Mohi-ud-Din said that we would never let the Model Town incident be ignored despite the effort of the incumbent government. He expressed his belief that very soon the public would hold the corrupt political elite accountable. He urged the workers to further mobilize their ranks, expedite the mass contact campaign, strengthen and improve the organizational structure of PAT down to the union council level, invite the people to join the PAT, and extend their outreach to the educated circles of Lahore to help people understand the importance of VIP culture-free party.

Dr Hassan further added that the platform of MQI and PAT provides the opportunity to the people of Pakistan to play their political and national role honourably. He said that the workers and leaders of MQI and PAT had set the precedent of sacrificing lives and properties for the sake of country. He lamented that due to incompetent rulers, Pakistan was being ranked among the most corrupt countries, noting that the darkness and inflation were the order of the day, and people had neither electricity nor water. He said that the unemployment was rampant, terrorism and extremism had frightened the people, the economy was plunging under the heavy burden of debts and loans, and new loans were being sought in order to strengthen the economy.

The Chairman of Supreme Council expressed his confidence in the leadership of Dr. Muhammad Tahir-ul-Qadri and said that he always led the people in the right direction. He said that Dr Qadri had shown the way that promised the hope and change. He concluded that the change required courageous and brave leadership and urged the youth and enlightened segments of society to play their role in bringing about peaceful change in the country.