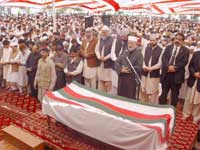 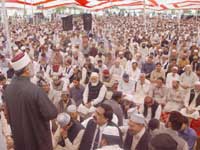 The funeral prayer was lead by Shaykh-ul-Islam Prof. Dr. Muhammad Tahir-ul-Qadri. Thousands of people had travelled from all over Pakistan to attend the funeral of this great servant and leader of Minhaj-ul-Quran International (MQI).

Mr Hassan Mohy-ud-Din Qadri Chairman Supreme Council MQI, alongside all the top central leadership of MQI with leaders and members from across the country attended the funeral.

Before the Funeral Shaykh-ul-Islam Dr. Muhammad Tahir-ul-Qadri gave a brief highly emotional talk which brought the tears showering down among the thousands of participants. Shaykh-ul-Islam was himself crying and finding it difficult to control his emotions. 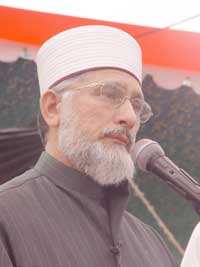 “I have been separated from my son.

I did not consider Makhdoom Tanveer Ahmad Quraishi Shaheed as a member or worker of Minhaj-ul-Quran International but as my son, my wealth, my 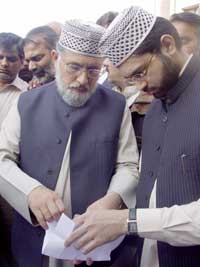 asset; he was my arm that has been cut off my body. Mr Makhdoom Tanveer Ahmad Quraishi Shaheed’s heart was full of pain for the mission.

I considered Mr Makhdoom Tanveer Ahmad Quraishi Shaheed as my third son alongside Hassan and Hussayn. The sacrifice which he performed throughout his life for the mission is unique. He has sacrificed everything, his wealth, his family, his home, himself for the mission. I had asked him to leave his home and job in Rawalpindi and come and work in the head quarters of the mission in Lahore. He did so. He had promised me that he will sacrifice all of his wealth for the mission when ever I ask him to do so. 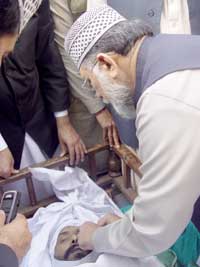 He phoned me a few days ago seeking advice on the matter of the ransom. I told him three times that he should send some body else to pay the ransom money. But he said that there is no body else to do this. I said , ‘You are in the Hands of Allah SWT and his company.’ Then the day before yesterday, I phoned him to ask about his well being and he told me that he is ok but the matter is not settled yet. After that I did not hear from him. 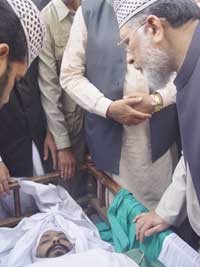 Paradise cannot wait to have young pious men inside it. It is impatient for such people. I feel like how I felt in 1976 when my brother Muhammad Jawed Qadri died at the age of 21. I lead his funeral and felt like this.

Oh Allah SWT, I am a very sinful person with out any good deeds, but if I have any good deeds then give them all to Mr Makhdoom Tanveer Ahmad Quraishi Shaheed.

I have chosen some land within the boundaries of MQI in Baghdad Town Township, which I have named, Raudha-tul-Mukhliseen, in which highly unique servants of MQI will be buried. Makhdoom Tanveer Ahmad Quraishi Shaheed will be the first such person to be buried there.

I announce the highest honour awarded by MQI for services to the mission, Nishan-e-Minhaj, which has not yet been announced for anyone else, for Makhdoom Tanveer Ahmad Quraishi Shaheed.” 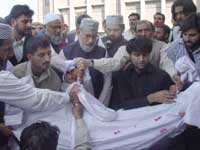 After the Funeral the body of Mr Makhdoom Tanveer Ahmad Quraishi Shaheed was taken to Baghdad town, Township for burial. Shaykh-ul-Islam was also present at the burial. He himself put the body of this great son in the grave. Then he stepped inside the grave and prayed for barakah following the Sunnah of the Holy Prophet Muhammad (saw). This was the fitst incident of its kind in the history of Tehreek-e-Minhaj-ul-Quran that Shaykh-ul-Islam himself stepped inside the grave of any worker of this great Mission, and it is a great honour and reward for Makhdoom Tanveer Ahmad Qureshi Shaheed. 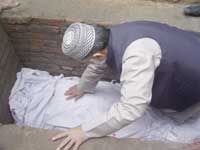 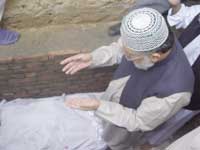 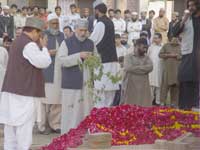 Click to visit Print Media Coverage for the same.

A Real Sketch of the Prophet Muhammad (pbuh) Book covers almost every topic, backed by the Qur'an and Sunna

Helping the poor is the obligation of the rich: Dr Hassan Mohi-ud-Din Qadri